Many foreign nationals plying their trade at the Yeoville Market lost their livelihoods when it went up in flames.

The South African Human Rights Commission’s (SAHRC) Gauteng office confirmed it was looking into the grievances of foreign nationals whose livelihoods went up in flames at Yeoville Market amid a recent air of xenophobia.

“The SAHRC calls for everyone to remain law-abiding and resolve issues in a manner acceptable in a democracy,” said deputy chairperson Fatima Chohan.

“The commission underscores a move towards social cohesion, while safeguarding the safety and human rights of all living in the area.”

Congo-born Belinda Kalala’s life came crashing down in the early hours of Tuesday when parts of the market burnt down.

“Our lives have been shattered. We are only being punished because we are foreigners in this country,” she said as she stood by the door of what used to be her only source of income. Having arrived in the country more than 10 years ago, Kalala earned a living by selling her wares on the pavements of Yeoville.

As her business grew, she moved to the Yeoville Market, where she rented a stall, mainly selling food items, including beans, cooking oil, fish and other items.

The majority of stall holders at the market are foreigners, trading in various food items they brought from home.

Their customers are other foreigners living mainly in different parts of Gauteng as well as other parts of the country.

Police officers were seen on Wednesday morning taking down statements from the affected shopkeepers.

READ | ‘We have lost everything’: Vendors count the costs after Joburg’s Yeoville Market gutted in fire

Shopkeepers not affected by the fire continued to trade.

They have formed a committee, where they donate as little as R20 per stall, to assist fellow countrymen who had lost their businesses.

Kalala said she was home when she received a call that the market was burning. “I ran here and saw the place on fire. More than 20 stalls, including mine, were burning. The fire was raging. Fire engines battled to contain the fire before it engulfed the entire market.

“I have lost nearly R50 000 worth of goods. I arrived in the country on Saturday from Malawi, where I had bought some of the food from the DRC. That entire stock is now ashes.”

Kalala echoed the sentiments of other devastated shopkeepers, who suspect the fire is linked to Operation Dudula, which was formed by a group of South Africans targeting people they believed were in the country illegally.

The movement had, on numerous occasions, raided homes and businesses allegedly owned by undocumented immigrants.

However, Operation Dudula’s Nhlanhla “Lux” Dlamini said they did not condone violence.

“Let the police do their work. If the fire was caused by a person belonging to Operation Dudula, let the law take its course. We don’t burn people’s properties,” said Dlamini. Kalala wants the government to intervene.

“We plead with the South African government to come to our aid. I have no money to stock my wares. I am a single mother of six children, who all depend on me. I want to restart my life,” said Kalala.

A woman, who identified herself as Sylvia, said her sister had lost nearly R50 000 worth of goods.

“I am surprised that we are called Amakwerekwere, who sell smelly and ugly food from Africa. Today, the people who hate us have torched the same food they criticise daily.

“My sister is a single mother, who looks after her children back home in the DRC. How are they going to survive when her shop was burnt to ashes? South Africans have no mercy.”

She is a businesswoman. She ran two stalls without any assistance. She is forced to restart her life. She has no money. She doesn’t have anyone who will help her financially to reopen her two shops.

Husseni Dep, also from the DRC, said he didn’t know how the fire was started, but also suspected that members of Operation Dudula was to blame.

Standing opposite his now burnt-out shop, Dep resorted to selling a few tomatoes and avocados.

“I am a father and must fend for my children. My shop was burnt to the ground with everything inside. I can’t wait and mourn. I have bought some tomatoes and am selling them to my clients.

“I, like others, was called to the scene around 00:30 that the market was in flames. I rushed here and was greeted by screams and cries from my fellow shopkeepers. They were uncontrollable.

“This was our source of living. I have been selling on the streets of Johannesburg since 2000 when I arrived here. I am only asking for South Africans to tolerate us. We come from the same continent and should be looking after each other.” Parts of the Yeoville Market were burnt down.
Ntwaagae Seleka

Dep called on the police to act swiftly and to probe the matter.

“The only thing that will make me happy is someone being arrested. People who torched the place must be arrested. We are living in fear in South Africa.

“We are being attacked for being foreigners. Operation Dudula were here last week. They told us to leave the place. If not, they will burn it,” Dep said.

“They were here protesting. They told us they were going to burn the market. They have fulfilled their threat. I have been here for almost six years. I am only selling Nigerian foodstuff to my fellow countrymen.

“I have lost R35 000 worth of goods. We need help. This needs to stop. Operation Dudula is getting out of hand. We are all human beings and can’t abuse each other. We need to live together in peace,” Nwachuku said.

African Diaspora Forum chairperson of the board of directors, Abdeslam Habiballah, said the incident was shocking and called on the police to take action. 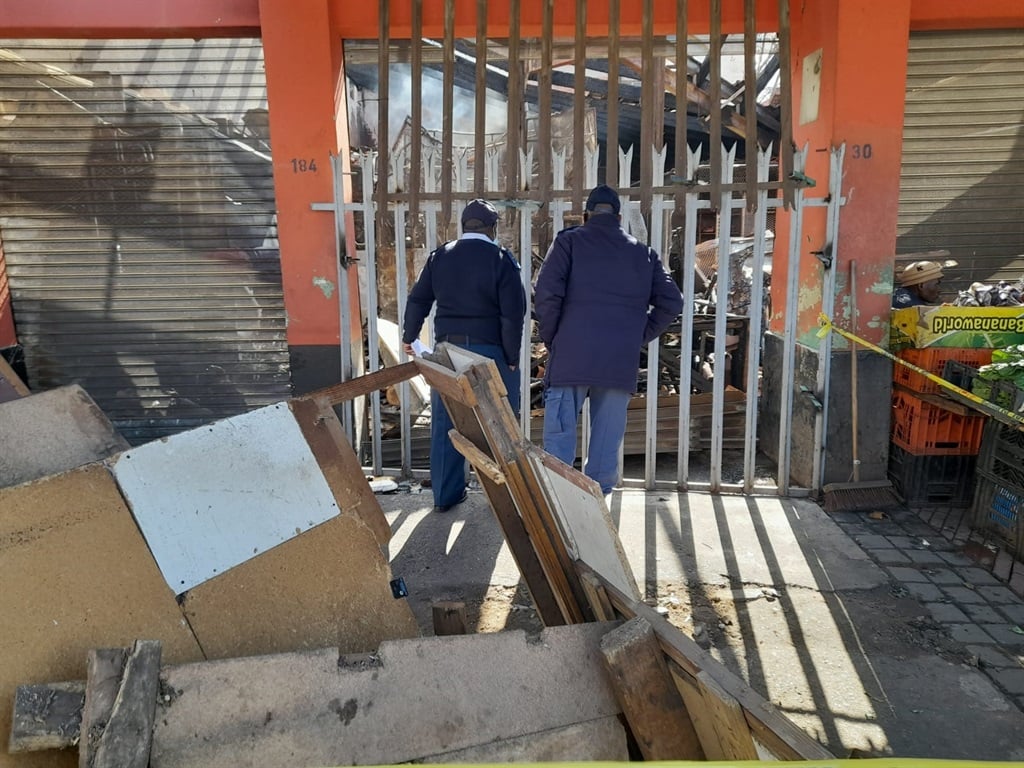 Parts of the Yeoville Market were burnt down.
Ntwaagae Seleka

“Police must act before such things occur. The threats were circulated before the fire happened. Police should have known before the place was torched,” Habiballah said.

City of Johannesburg EMS spokesperson Nana Radebe-Kgiba said they received the call about the blaze at 00:27.

“Two fire engines and a water tanker from Fairview and Malvern fire stations were dispatched and found part of the market engulfed in fire. Twenty-three shops were affected. The cause of the fire could not be determined because of the damage.”

Police spokesperson Lieutenant-Colonel Mavela Masondo said they had opened an inquiry to investigate the cause of the fire.

“Police received an anonymous phone call that Yeoville Market was on fire. On arrival at the market, police found firefighters extinguishing about five burning stalls. The cause of fire cannot be confirmed at this stage,” said Masondo.

Chohan said the SAHRC’s Gauteng provincial office will engage with law enforcement agencies and others to establish what ensued, and to ensure that perpetrators are identified and brought to book.

“We are amenable to meeting with opposing parties to find long-lasting solutions. We call on other state parties to step in and provide relief to victims. We will continue to monitor the situation,” she added.