Black aluminium used for the balustrade and to frame the doors and windows in his Observatory home inspired the striking style of Rupert Smith’s bedroom. He loves an industrial, modern look but in this private space, he was after a warmer aesthetic.

“My home is double-volume, which can feel cold and soulless if it’s given a run-of-the-mill modern treatment,” Rupert says. He created warmth by layering various textures in the bedroom, starting with an unplastered matte black focal wall behind the bed.

Stairs from the mezzanine bedroom lead up even further to another mezzanine level where Rupert’s son sleeps.
slide 1 of 1 • I think it’s a good idea to start decorating a space using a black-and-white ‘frame’ and then build layers from there.

• Maximise available light, inject energy in the form of living plants and pay attention to beautiful details that will make you feel good in the space, whether it’s a childhood throw or putting up a piece from your favourite holiday destination.

• Design is about creating a coherent look. This can be achieved by using various shades of one colour and repetition of patterns, colours and textures. #2 A burst of energy

The main loft bedroom in Mynhardt Joubert’s Paarl home went from all-white to a bright blue that packs an energetic punch!

“The white was a safe choice and worked for a while after I moved in,” Mynhardt explains. “But it didn’t feel like a space that really reflected my personality. I wanted a jungle of colour.”

Mynhardt chose Plascon Teal Tide for the accent wall behind the bed. “I love blue and I wanted something to complement the touches of blue already in the room, such as the bathroom vanity and bedside table.”

The open-plan space was inspired by the design of many European lofts. “It’s very similar to what you might find in a loft in a Parisian apartment. This aesthetic has grown on me so much that I will forever design bedrooms around it,” Mynhardt says.

The dark brown vinyl floor was laid in a herringbone pattern to add another interesting dimension.

Mynhardt decided against a headboard and made use of a wall map instead; he bought it from a guy clearing out his office – for R50!
I love all the colours – it’s like something out of a storybook. – Mynhardt • The calming hues of blue promote relaxation, so it’s no surprise that it’s just the right colour in a space designed for snoozing. Pair cool blues such as Pristine Blue or Blue Bottle Blue with warm yellow and red tones, a warm grey or even a nude colour for balance. #3 In a sentimental style

Hannes and Tina Maritz, owners of wedding and event coordination company Kraak, consider themselves to be quite sentimental and wanted the pieces in their Wellington home, including their bedroom, to be rich with meaning.

The house itself used to be a dairy – their headboard was made from some of the old zinc corrugated sheets that once made up the roof! The trunk at the end of the bed is filled with vintage toys from Hannes’s childhood and the cupboards were all passed on from Tina’s family members.

The couple decided on a white canvas to create an airy, relaxing space and even painted the raw concrete floor white, using a water-based floor paint for a rustic finish. The ceiling is made up of white Rhinoboard and custom-designed steel frames. “We wanted a bedroom that’s neutral yet soulful and we love the openness and calm that the white brings, especially with all the light we get through the large arched double doors,” Hannes says. #4 In all its graphic glory

Interior designer Debbie Luke of Designed by Debbie was tasked with transforming a dated bedroom in Andrew and Katja Wegner’s Johannesburg home into one that is fresh and fun. First she replaced the carpeted floors with screed, then she added a striking feature wall behind the bed, separating the bedroom from the bathroom and bedroom cupboards

“The bed now overlooks the pool in the backyard. I love that the bed is completely separate from the rest of the space as it needs its own spot into which you can truly retreat,” Debbie says.

Debbie custom-designed the graphic black-and-white wallpaper, inspired by a geometric splashback she created when renovating the couple’s kitchen. “I wanted to continue the theme in the rest of the home: minimal yet edgy with contrasting design elements,” she explains.

Debbie had to design the look around the bed Katja inherited from her parents. “To make the antique bed work in a modern setting, I chose a neutral palette and continued the striking contrasts with elements such as the black and white in the wallpaper,” she says.

• Contrast harder elements like screed floors with softer ones such as plush rugs.

• Make each space feel likeaholiday! In this case, the bed now faces the pool and is separate from the bathroom and even the dressing area.

• Make sure that every item in your bedroom is something you love and createsasense of peace when looking at it, touching it or smelling it.

• Step outside your comfort zone and create a look that inspires you. You don’t have to stick to any rules.

• Keep your bedroom clutter- and technology-free. 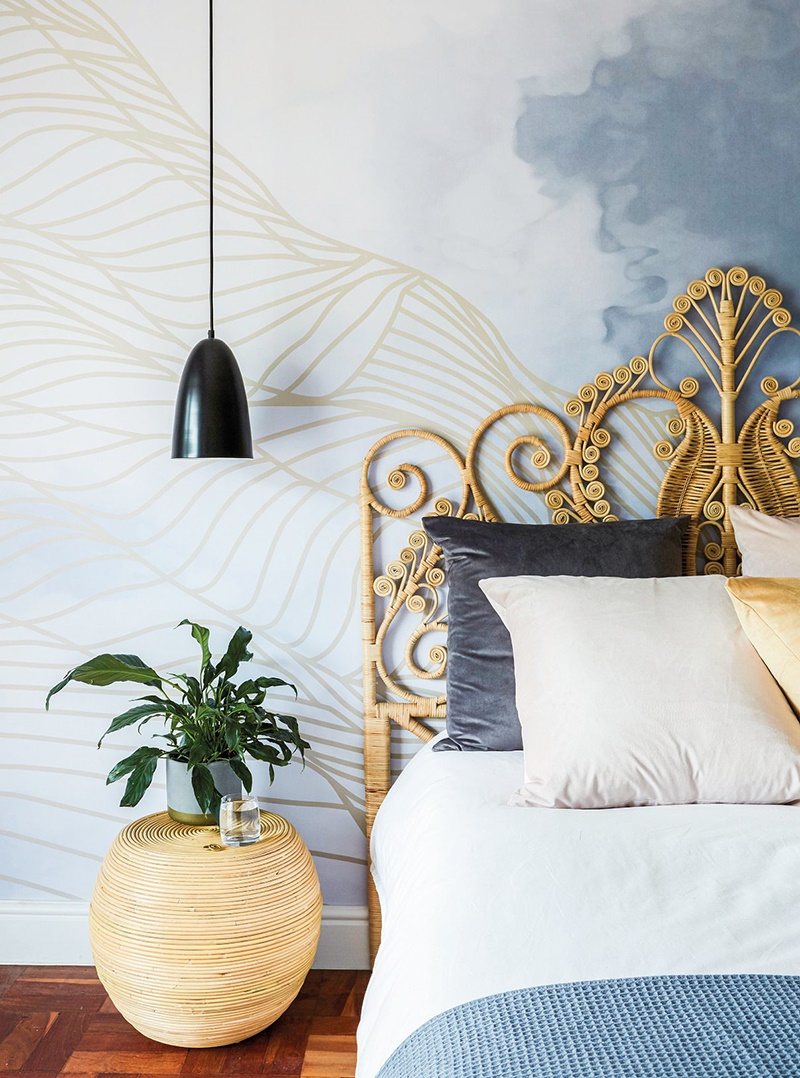 Ryno and Marita Palm wanted their bedroom to reflect the aesthetic in the rest of their Somerset West home, which features mottled cement floors and walls with touches of gold in the furniture and decorative pieces. “While we wanted each room to have its own unique elements, I think that having some similar finishes throughout a home creates a good visual flow,” Marita says.

“The bedroom’s unique element is the wallpaper behind the bed. We wanted a simple, tranquil design that would enhance the raw cement and touches of gold.”

The couple asked Alana Groenewald and the team at Groen Bespoke Wallpaper to design something with this in mind and they love the end result!

Choose wallpaper that really speaks to you, that inspires you and gives you that feeling of contentment or joy every time you look at it. – Alana

A mix of grey and white cement was used together with a little bit of black oxide to create the mottled effect on the floors and walls in the en suite. Marita’s brother Arno made the striking vanity using steel epoxied in a gold colour; a wooden slab was added for the top. “The vanity adds warmth against the cement finishes in the space,” Marita says. CHOOSING THE RIGHT WALLPAPER FOR YOUR BEDROOM

• Know what soothes you. A bedroom should beaspace in which you can relax and recharge, and for different people that might mean different stimuli. If tranquillity and subtlety resonate with you, opt for a soft pattern such as a linen or marble look. If you’re more drawn to interesting and colourful compositions, consider a bold floral design or an abstract pattern or artwork.

• The colour known for having the most soothing and relaxing effect is blue. Colours that have a similar effect to blue include grey, light shades of purple and blue-green, as they share the same undertone. Subtle shades of yellow can create a feeling of warmth and light and are often associated with happiness, while green is comforting and revitalising because of its connection to nature.

• Wallpaper is suitable for most spaces but confirm with your supplier that their product can be used in areas where it might come into contact with water or steam.

• Wallpaper can be installed around most fixtures such as windows, air-conditioning units, plugs and cupboards. Send a photo of your wall to your supplier so they can make the necessary recommendations before installation takes place. Be the first to comment on "Readers showcase their beautiful bedrooms"