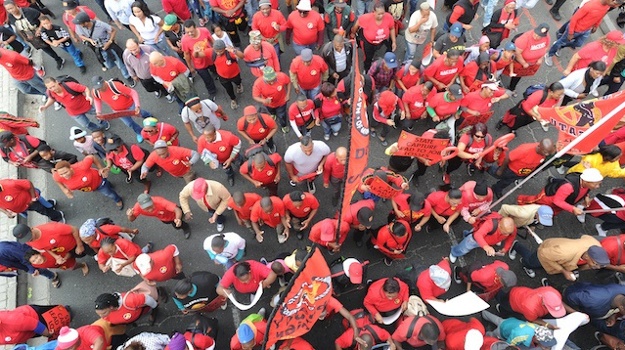 A Cosatu march. The City of Johannesburg asks for a fee if residents want to hold a march. (GALLO)

The City of Johannesburg imposes “fees” to be paid by those intending to exercise the right to protest within its vicinity. This, it says, is in line with the Municipal Systems Act. Sithuthukile Mkhize, Thandeka Kathi and Zanele Malindiargue this is a bizzare practice.

The Constitution provides everyone with the right to peacefully gather, demonstrate, picket and present petitions. Protests in South Africa have often been used to voice frustration and draw attention to a particular issue or cause in the hope it will be addressed. Yet, some local municipalities have begun to charge fees in order to exercise the right to protest.

The Regulation of Gatherings Act (RGA) is the law regulating protests in South Africa. According to the RGA, a protestor is required to serve notice to the designated responsible officer at the municipality. The purpose of this process is merely to notify the officer of the intended protest. Nothing in the law regulating protests requires someone to seek permission or satisfy any condition in order to be able to fully exercise the right to protest. Imposing a condition of any manner would thus be unlawful, unconstitutional and contrary to the objectives sought to be achieved by the Constitution and legislation.

The City of Johannesburg, however, seems to be a rather unique Metropolitan in the country as far as exercising the right to protest is concerned. The City of Johannesburg imposes “fees” to be paid by those intending to exercise the right to protest within its vicinity. This, it says, is in line with the Municipal Systems Act, which gives the City authority and mandate to levy fees for services provided to everyone residing in its vicinity. There are very broad powers given to municipalities to levy and prescribe fees. The authority generally allows the levying of fees for services consumed by members of the public, such as the provision of water, sanitation, electricity and other basic services.

The City of Johannesburg argues that protest action is a form of commercial/special event which requires additional municipal services from the Johannesburg Metropolitan Police Department (JMPD). The JMPD is a municipal police service established in terms of the South African Police Services Act. The services provided include traffic control and general policing services. The City’s Mayoral Committee established a Tariff Determination Policy from the 2013/2014 financial year. The tariffs, mainly those relevant to minor policing services such as those provided during protests, are charged at a reduced rate for NGOs and NPOs. The reduced rate currently stands at 80% of the fee payable, according to the City.

READ | Court battle over whether you have to pay to protest

Thirdly, it is unclear how the funds received from protests are allocated or whether the fees go directly to the budget for the JMPD. The practice is also an arbitrary one because it is unique to the City of Johannesburg. JMPD is not the only municipal police service in the country – there are many others – but the practice of levying fees on protesters remains unique to the City of Johannesburg. The practice is unjustifiable and ought to be set aside.

The reduced rate for NGOs and NPOs does not make the practice lawful. It remains problematic because there should not be fees levied in the first place. The prescription of the fees has the effect of stifling the right to protest. The non-payment of the fee results in the limited deployment of members of the JMPD. The amount of fees charged varies according to the number of people participating in the protest. Previously, protestors have been charged as much as R15 000. Recently, members of the Koponang Afrika Against Xenophobia Campaign presented a notice to protest on 21 March 2022. After meeting with the responsible JMPD officer, they were asked to pay an amount of over R10 000.

Two NPOs, the Right to Know Campaign and the Gauteng Housing Crises Committee, are challenging the practice in the Johannesburg High Court and are represented by the Centre for Applied Legal Studies (CALS). They seek an order setting aside the practice of levying fees by the City of Johannesburg and a declaratory order declaring the practice in conflict with the Constitution and the RGA. The City is opposing the application, which was heard on 26 April this year and is currently awaiting judgment.

Even though the City of Johannesburg argues that non-payment of the fee does not amount to a prohibition of the intended protest, the effect and result of non-payment means protestors are left vulnerable as they do not enjoy the complete protection and presence of the JMPD. The JMPD will only deploy half the number of officers it would deploy compared to when one actually makes payment. Furthermore, the protest is labelled by the City as “unlawful”.

We call on the City of Johannesburg to review and set aside all resolutions, policies and laws which require protestors to pay a fee as a condition for them to exercise their right to protest. The practice is arbitrary and irrational, and has a chilling effect on the right to protest. The City of Johannesburg ought to already have a budget to accommodate protests; therefore, there is no justification for prescribing and levying protests fees, regardless of the amount. The City of Johannesburg is furthermore called upon to ensure that its policies, resolutions and laws are in full compliance with the International framework, Constitution and the RGA.

Be the first to comment on "Paying to protest: Why is the City of Johannesburg asking for money?"