Looking for something to do in Johannesburg? Whether you're a local, new in town or just cruising through we've got loads of great tips and events to offer. Find out what’s on in Johannesburg with our regularly updated events calendar featuring the best upcoming events in Johannesburg and the area.

This guide lists events at a glance, showing what’s on each month. See the highlights of What’s On for Johannesburg, featuring the best of things to do in Johannesburg – Live Music and Gigs, Family Events, Art & Culture, Food & Drink and much more. Johannesburg fundraisers and charity events.

Important This Event Calendar is not maintained on a daily basis and some events may have changed dates or are no longer happening. Please double-check the event websites for the most up-to-date information. 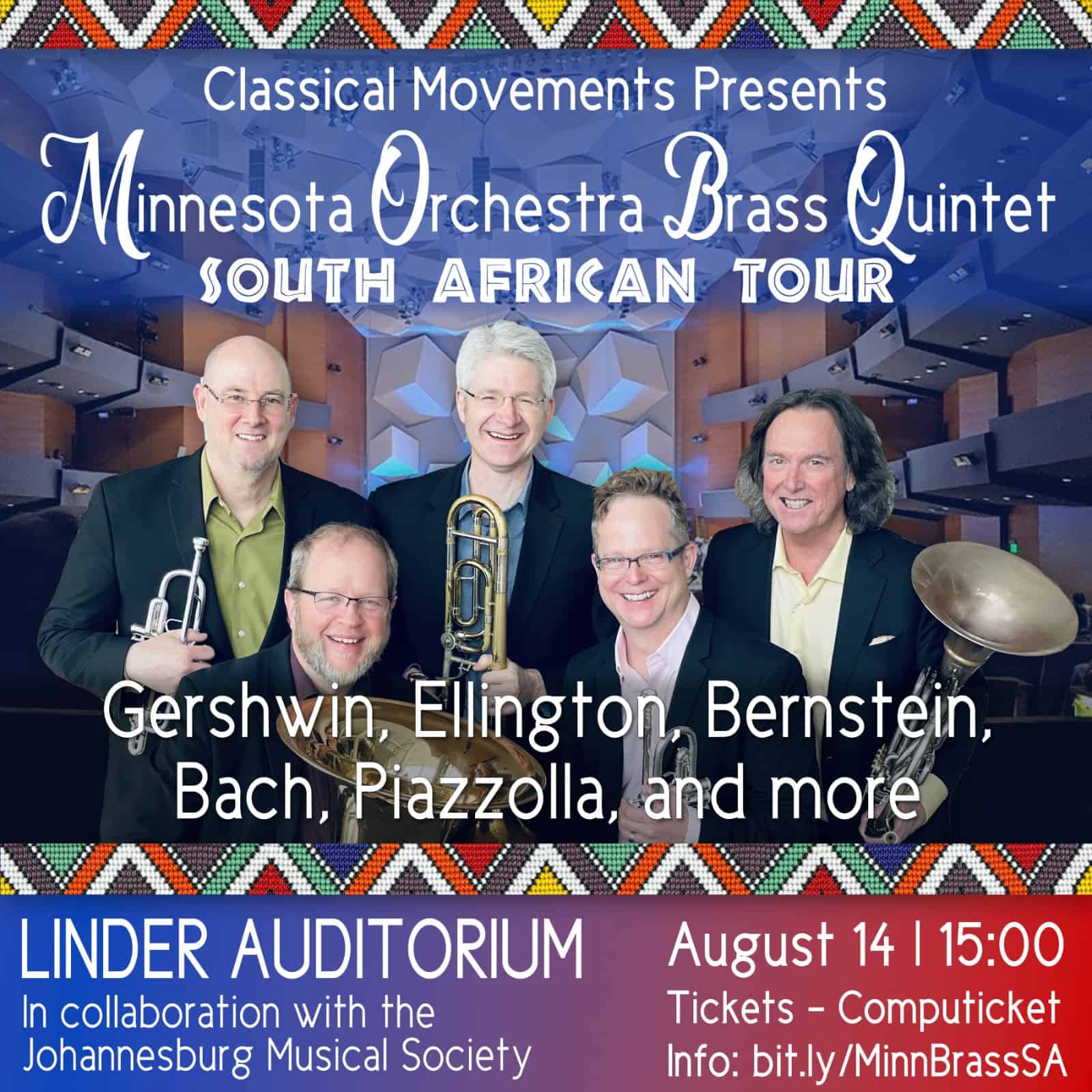 ABOUT THE ENSEMBLE
Established in 1903, the Minnesota Orchestra is a Grammy Award-winning orchestra known for acclaimed performances in its home state and around the world, a storied history of recordings and radio broadcasts, and innovative educational engagement programs. The orchestra performs a wide variety of music including nearly 175 concerts in a typical year, primarily at Orchestra Hall in downtown Minneapolis, its home since 1974. They also tour regularly throughout Minnesota, nationally and abroad. The quintet has played together for 15 years and has performed together and individually in every US state and throughout Europe, Asia, Australia, South America, and Africa. They have performed in major concert venues worldwide and with all of the leading US orchestras including the New York Philharmonic, Philadelphia Orchestra, Cleveland Orchestra, Boston Symphony, LA Philharmonic, and Chicago Symphony.

The Minnesota Orchestra Brass Quintet will present an eclectic, entertaining, and virtuosic program featuring songs of joy from around the world inspired by dance rhythms of many cultures. The program will include the music of Leonard Bernstein, George Gershwin, Duke Ellington, Astor Piazzolla, and Paquito D’ Rivera as well as African American spirituals, and brand new works by award-winning composer Jack Stamp.

Classical Movements has been presenting the annual Ihlombe! South African Choral Festival across the country since 2009 and is the same company that brought the Minnesota Orchestra, as the first professional US Orchestra to tour to Africa, on their groundbreaking tour to South Africa in 2018. This time, they are bringing two renowned American chamber ensembles to the country.

If you have an event, that you would like to be featured on our Events Calendar, please visit Free Event Listing.